Addicted and Overwhelmed: Why 1 in 3 UK Adults Are Cutting Back on Social Media 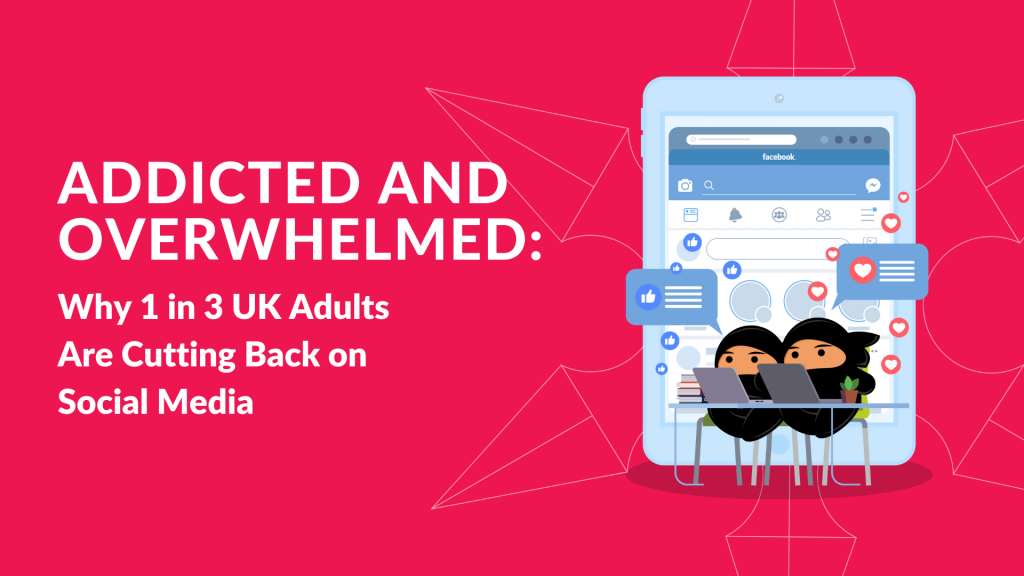 Fake News? Nope, you read that headline correctly — according to new survey data¹, one in three adults in the UK have slashed their social media usage in the last 12 months because they feel addicted to or overwhelmed by social networking.

Let’s dig a little deeper into that, shall we? Here’s what we found.

Over 35% of UK Adults Have Cut Back on Social Media

In a recent survey, we asked UK adults if their social media usage had decreased in the last 12 months, and more than one in three said it had.

Despite the fact that global social network usage continues to increase YOY² — the number of users around the world has increased by over 280 million since January 2018 — individual social network use in the UK appears to be on the decline.

According to the latest Ipsos MORI (a leading market research firm) Tech Tracker report, the percentage of UK adults accessing social networking sites has steadily declined over the past year (70% in Q1 2018 versus 65% in Q1 2019).

This data is supported by the results from our own survey, which shows that over 35% of UK adults have made a conscious effort to cut back their social media use in the last year, with those in the millennial age bracket (anyone born between 1981-1996; aged 23-38 in 2019) showing the biggest reduction in usage — over half said their social media usage had decreased in the last 12 months!

In the wake of the Cambridge Analytica scandal and wave after wave of fake news, you’d be forgiven for assuming the top reason people gave for reducing their time on social media was a lack of trust. In reality, trust issues and concerns over privacy and data protection came third (26.2%) and fourth (21.4%) respectively. 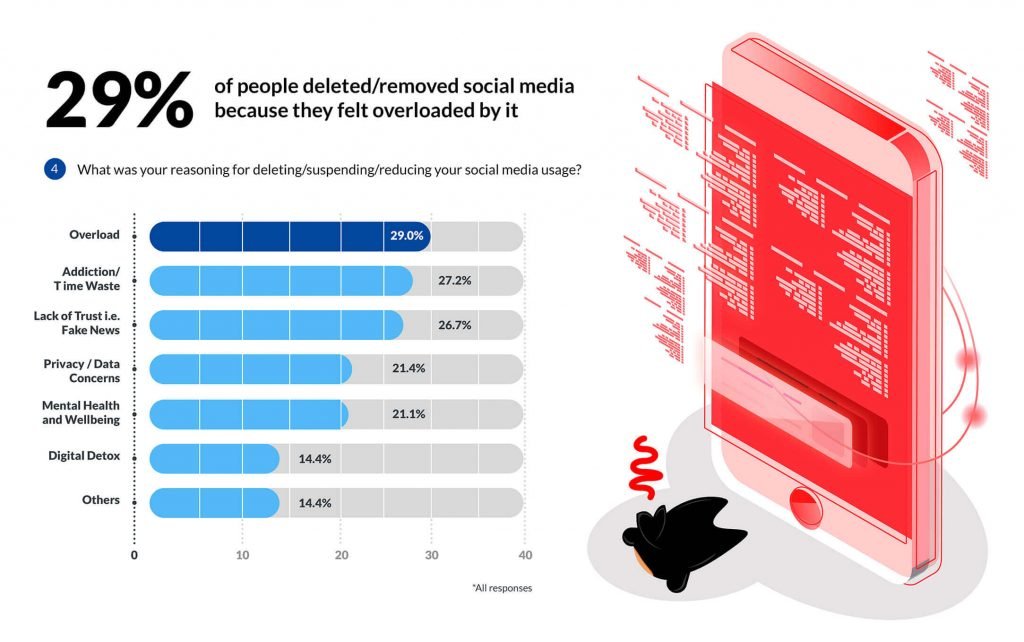 The top reason (29%) people gave for deleting or suspending their social media account was feeling overloaded, while 27.2% stopped using social media because they felt addicted to it.

Given the vast amount of data and media coverage published in recent years about how social media can negatively impact our mental health, it’s perhaps not surprising that we’re becoming more aware of how social media affects us and taking steps to combat this by consciously reducing our usage.

Perhaps unsurprisingly, people are much more likely to temporarily remove social apps from their smartphone (39.2%) than delete their account altogether (9.6%).

This may be an indicator that people are buying into the so-called “Digital Detox” as a way of unplugging and taking a break from the pressures of social media — and technology as a whole. 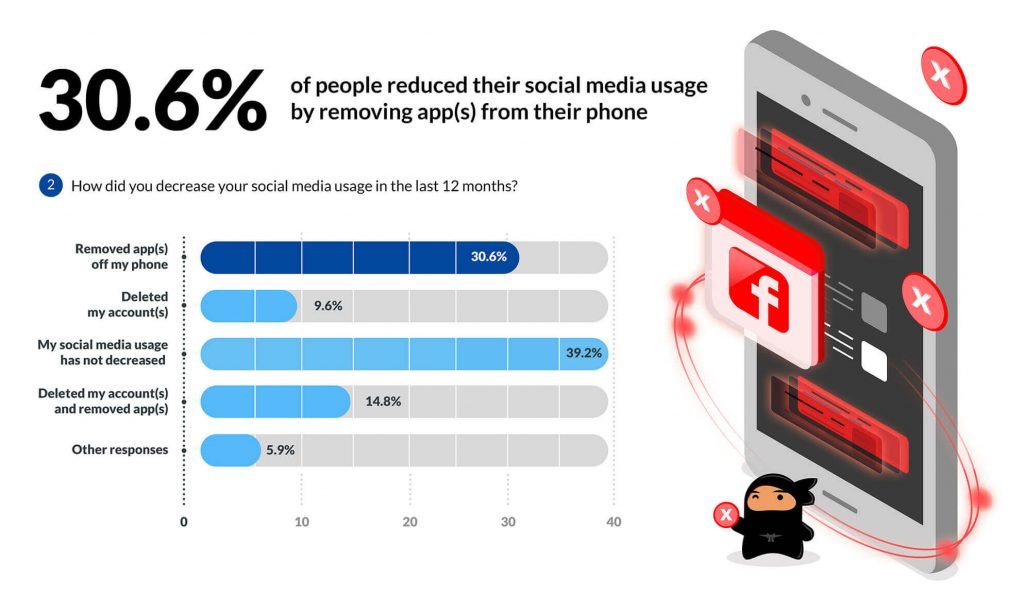 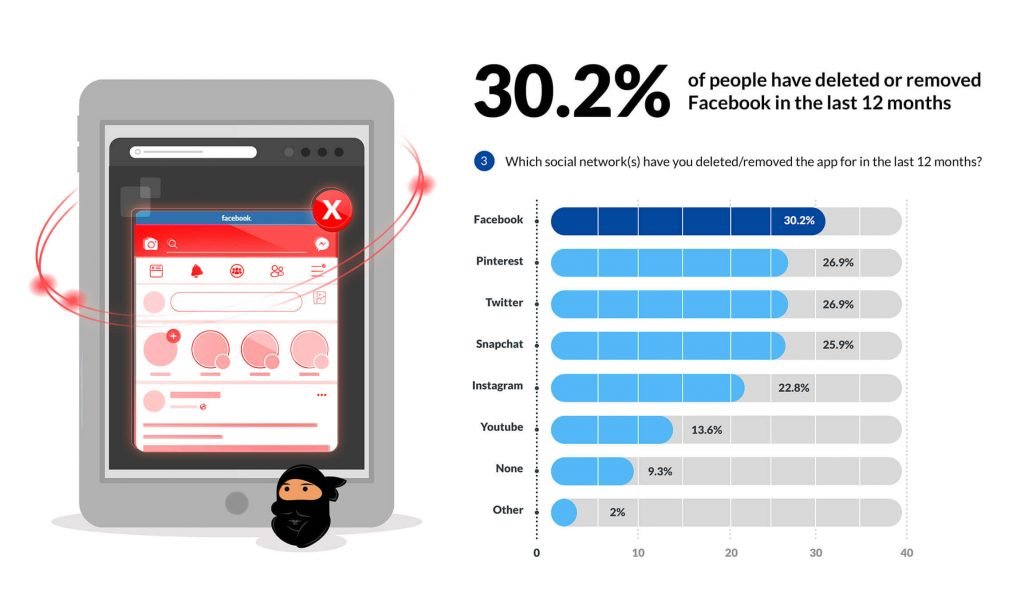 Data from Ipsos MORI would appear to back up our results.

According to data from its quarterly Tech Tracker report³, the use of Facebook, Instagram and Snapchat have all declined in the last 12 months — LinkedIn is the only network showing an increase in usage in the first three months of 2019 compared to the previous year (NB: there is no comparable data available for Pinterest). 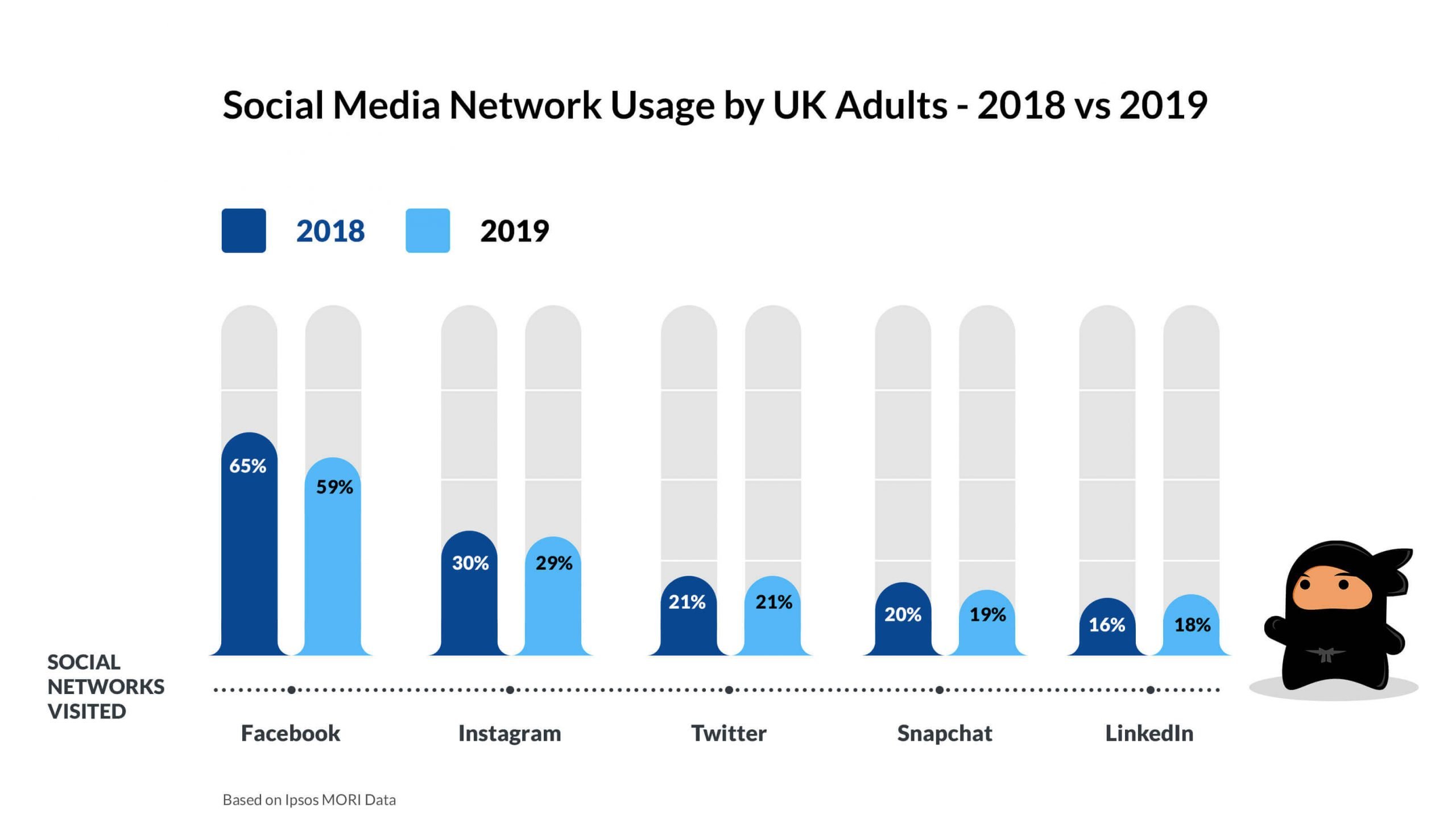 More Men Than Women Are Scaling Back Their Social Media Usage

Interestingly, more men than women are cutting back on their social media time (39% versus 32.4%), with almost half of millennial males saying they’ve scaled back their usage in recent months (46.7%).

35.1% said they did this by removing social networking apps from their smartphone, with a whopping 44.7% removing or deleting Facebook.

So why are millennial men leaving Facebook in their droves? The answer may lie in their reasoning for cutting back on social media.

In Media We Trust?

As we previously mentioned, the top two reasons people gave for cutting back time spent on social networks was feeling overloaded by (29%) or addicted to (27%) social media.

However, when we filter the survey results by sex, we see an interesting turn of events and possible insight into why men — and millennial men, in particular — are saying sayonara to Facebook. As we can see above, the top three results have changed quite dramatically.

Men, it would appear, have slashed their social media usage mainly because of trust issues and concerns over their privacy and data (Lack of Trust, i.e. Fake News: 35.2%; Overload: 26.6%; Privacy/Data Concerns: 26.1%). 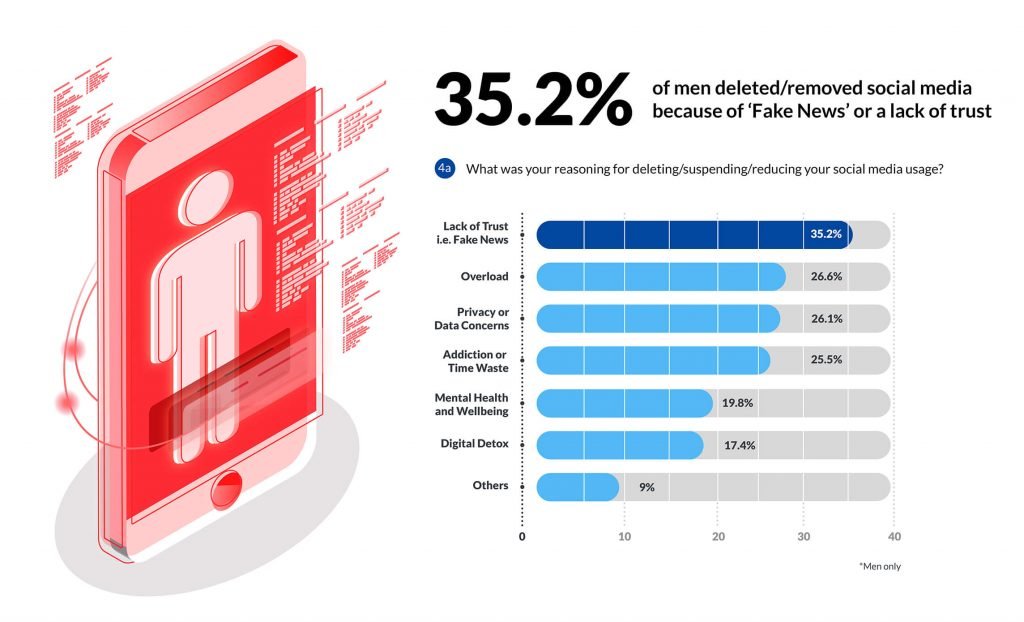 Women, on the other hand, are cutting back mainly because of concerns about their mental health and wellbeing (Overload: 31.3%; Addiction/Time Waste: 28.8%; Mental Health and Wellbeing: 22.4%). 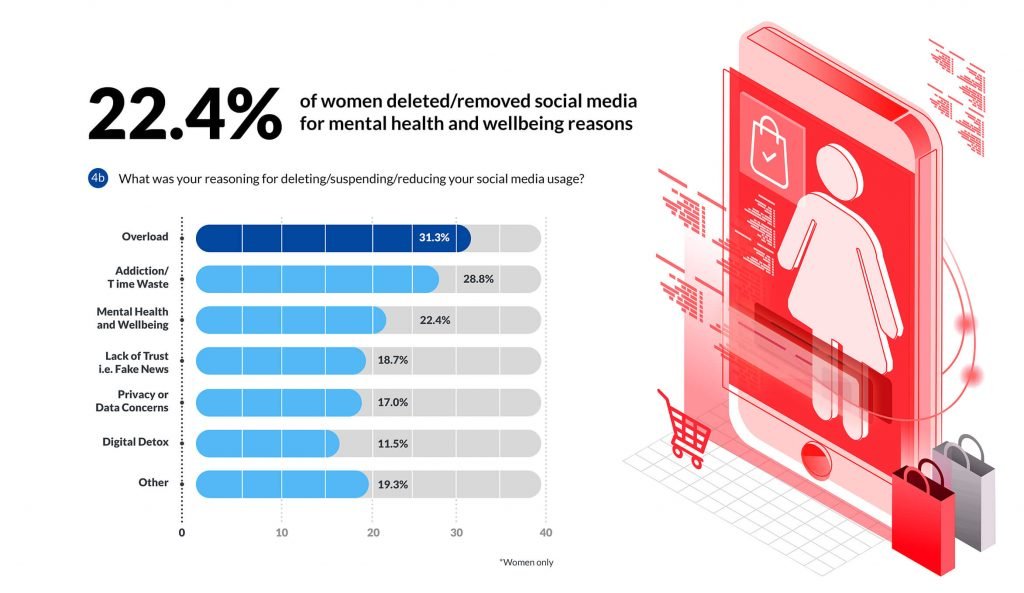 This may explain why more men than women are deleting Facebook, especially considering recent data breaches and ongoing issues with fake news on the platform — trust in Facebook has dropped by an astonishing 66% since the Cambridge Analytica scandal.

Following the survey, we decided to delve a little deeper to add some “real-world” context to the data by speaking to a number of people who’ve reduced their social media usage in recent months or even stopped using it altogether.

A 26-year-old female from Sandwell said she deleted Facebook “after realising that it was a major time waster and actually quite harmful.” She went on to say that “we all know that our social media lives are largely curated, but that doesn’t lessen the potential for anxiety over seeing other people live their apparently ‘perfect’ lives. Having deleted the app and deactivated my account, I wouldn’t look back. It’s not something I miss at all.”

A 27-year-old female from Greater London said she got rid of her Twitter account because she felt it was “pretty negative and a bit showy-offy at times”. She feels “fairly neutral about the decision to stop using it” and doesn’t miss it.

This 28-year-old male from Brighton said that “despite still using Facebook myself, I’ve definitely noticed that fewer of my friends use it these days and this year, I organised my birthday via WhatsApp instead of Facebook for the first time in years — I only ever use Facebook for setting up/attending events and if my friends aren’t on it, there isn’t much value to me. That being said, I wouldn’t delete Facebook just in case it helped me get in touch with an old friend I couldn’t reach otherwise.”

Another 28-year-old female from Cambridge said she stopped using Facebook predominantly due to privacy reasons but that she’s “not really a fan of Facebook from an ethical point of view either.” Similarly to the man from Brighton, she also said she’d delete her account completely “if it weren’t for the fact that old uni friends still use it to set up events that they don’t communicate about elsewhere.”

A 27-year-old man from Southhampton didn’t delete his account but did remove the app. He stated, “I felt that I was spending too much time scrolling through Facebook and thought that removing the app would help because I wouldn’t be able to see my notifications.” While he said that it’s still the main way he keeps in touch with old friends, he’s found that deleting the app has reduced his time spent on the platform: “Instead, I log in through the browser on my phone and I do think I use Facebook less now than I did.”

Finally, this 25-year-old male from Preston said he stopped using Facebook and Instagram because he “didn’t feel right having so much information stored with a company that doesn’t particularly treat personal data all that well.” His concerns also reflect our findings that millennial men have less trust in the platform, saying “Facebook also seems to generally be filled with lots of ads, fake news and memes rather than personal content.”

This anecdotal evidence would appear to back up the data collected in our survey, with most quoting mental health and privacy issues as their main reasons for deleting or suspending their accounts.

The tide is clearly turning for Facebook and other social media platforms, and while we might see fake news stamped out in favour of high-quality and well-researched content in future years to come, the implications of social media on our health and wellbeing have more far-reaching implications.

What’s your opinion? Have you consciously cut down your social media usage? Get in touch and let us know — ironic, we know!

² Digital 2019 Report compiled by We Are Social & Hootsuite: Digital 2019: Essential Insights into How People around the World Use the Internet, Mobile Devices, Social Media, and E-Commerce

Feel free to use these images. All we ask for is that you credit our hard-working team for their work with a mention and link back to this post.

You can find all of the images available in their original sizes here:

Addicted and Overwhelmed: Why 1 in 3 UK Adults Are Cutting Back on Social Media by Exposure Ninja is licensed under a Creative Commons Attribution-NonCommercial-NoDerivatives 4.0 International License. 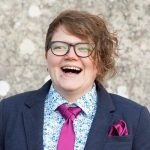 About the Author
Stacey Overton
Stacey is the samurai master of Influencer Outreach at Exposure Ninja. With over three years experience in Content Marketing, Stacey has been integral to the...
Read more about Stacey Overton