How To Deal With Public Complaints on Social Media 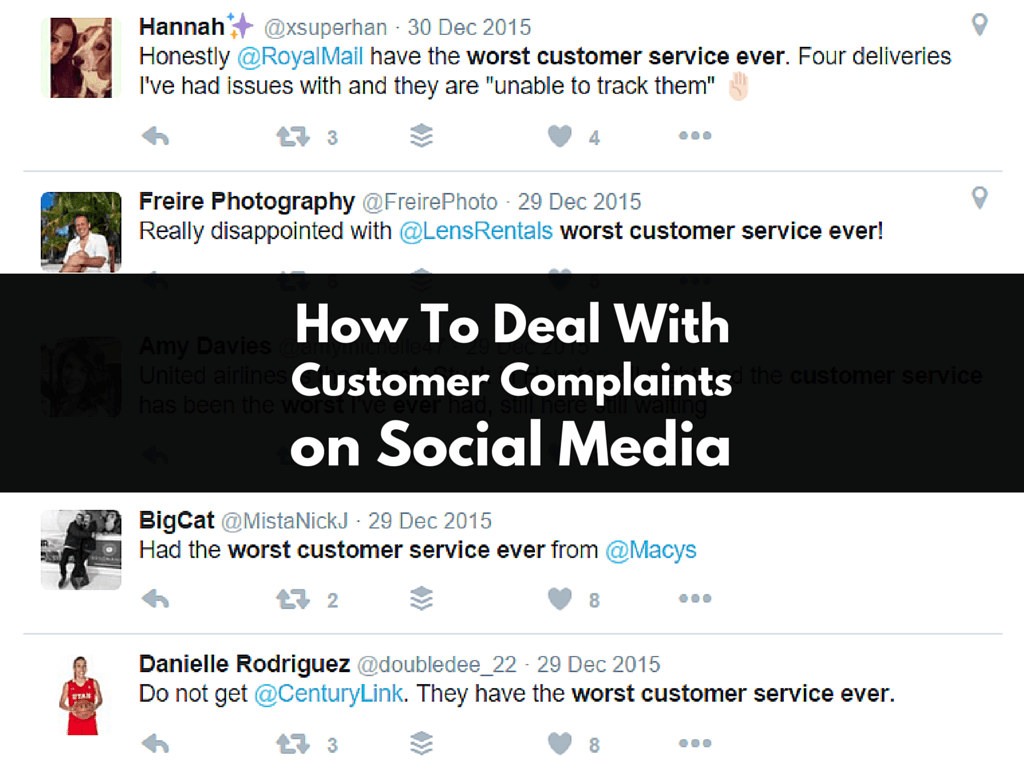 After opening new social media accounts for your business, it’s only a matter of time before you start to receive your first complaints (and as you grow, you will receive more).

Stop! Breathe! Take it easy! Your business is your baby, so it’s easy to get upset or angry when a customer posts a complaint online, especially if that complaint is untrue or unfair. But don’t take it personally. Even the very best businesses get complaints — what makes them the very best is the way that they handle those complaints. In order to handle a complaint well, it’s important to see each complaint for what it really is: **an opportunity**.

From the first moment that you receive a complaint on social media, your primary goal is to show that you’re listening. Acknowledging the complainer and offering to investigate further with them through direct message or over the phone shows them that you’re committed to fixing the issue.

Stay Strong — But Don’t Be Aggressive

Although it’s not a good idea to avoid apologising or admitting fault, it’s important that your brand keeps its integrity.

Publicly commenting on particular cases or mentioning specific team members is generally unnecessary and has the potential to damage your reputation, as well as the morale of any team members mentioned.

Like the martial arts principle of Jū, you want to accept your opponent’s attack and use it to your advantage rather than stand rigidly and take a punch to the face. So instead of dwelling on the problem or getting too caught up in apportioning blame, focus on finding a solution that makes everyone happy.

Showing aggression or defiance in complaint responses is a recipe for disaster and things can quickly get out of hand. In a recent episode of TV show Kitchen Nightmares featuring fiery chef Gordon Ramsay, an Arizona restaurant called Amy’s Baking Company failed to capitalise on the good publicity a nationwide TV appearance should have caused and instead began one of the most terrifying (yet entertaining) social media meltdowns in history.

The Amy’s Baking Co Facebook page was targeted by viewers who started leaving comments about the show and the owner Amy. Amy and the team responded with aggression, which in turn attracted more attention.

As the page began to go viral on social sharing site Reddit, more and more people began leaving comments not just about the show and staff, but how they were handling the rapidly accelerating runaway train. This in turn produced even more aggressive responses from the page owners who by now had entered a complete meltdown:

“I AM WONDER WOMAN. I AM A GREAT CHEF, A GREAT WIFE, AND A GREAT MOM TO MY KIDS. AND WE WILL BE PARENTS TO A HUMAN KID, ONE DAY TO. WE WILL SHOW ALL OF YOU.”

Nothing says “calm and controlled” like caps lock, right? For those who enjoy that sort of thing, the Facebook page is well worth a visit.

Clearly, this is an extreme example, but cases like this prove that meeting hostility with aggression just doesn’t work online. Once situations get emotional they have the potential to quickly get out of control. Social communities gather like sharks as soon as they detect blood in the water. The takeaway is no matter how personal the issue feels, try to never respond in an emotional way.

Almost every business will, at some point, have dissatisfied customers. Some people just don’t want to be happy and it doesn’t matter what you do, they will stubbornly refuse. It’s just part of doing business and a side effect of serving a lot of people. When the comments come, it’s important to learn from them and meet them in a respectful and appreciative way on social.

What’s YOUR solution to public complaints?