A History of Google Algorithm Updates 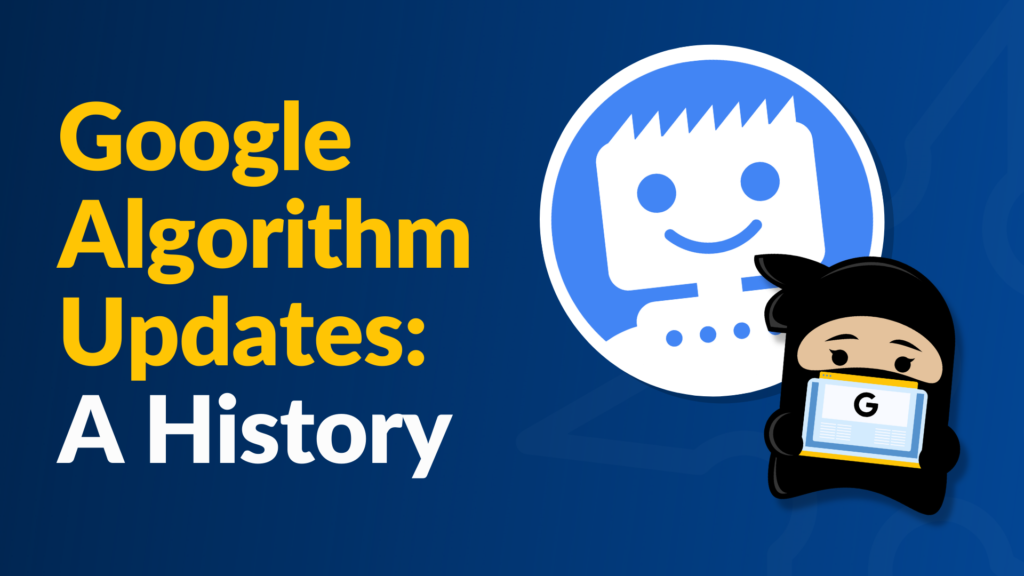 The Google algorithm changes on an hourly basis. It’s impossible to keep up with every change and test, but we’ve chronicled the main updates since 2011, to help you understand the type of changes Google makes, and why certain websites and content perform better or worse than others.

We’ve included some information about the algorithm, and how it works, but if you’d prefer you can jump straight to the algorithm updates

What is the Google algorithm?

The Google algorithm is the process Google uses to find the most relevant content each time a search is made.

It’s made up of hundreds, if not thousands, of different data signals that are referenced each time you make a search. This helps Google return the best search results for an individual, rather than them being the same for each individual person’s search query.

Each time you make a search, Google is gathering data about you. This could be the type of searches you normally make, the location you are searching from and potentially your age and gender based on previous searches. This means that Google can use these signals to give you the best search results possible.

No-one outside of Google knows exactly how the algorithm works as this is a close guarded company secret. It’s also so complex that no one person can surely understand the complexities of the entire thing. We do get some aspects shared with us via Google’s updates, which we can use to create the best content possible for our websites.

Why Does Google Update the Algorithm?

Google regularly updates their algorithm for various reasons. This could be as big as changes in law, or as small as wanting to improve a ranking signal. Historically there were large scale updates that completely changed the way the algorithm worked, for example the Panda update and the Penguin update, but currently these updates are rolled out as broad core updates which don’t have the same impact.

…and many other aspects of Google search that we take for granted today.

These updates happen all the time, but some larger updates can have a huge impact on website traffic, for better or for worse.

What to Do If Your Ranking Drops

Large algorithm changes can leave a huge impact on your website’s traffic. If this happens, don’t panic! We’ve put together a mega guide on what to do if your ranking drops. It’s full of actionable advice to get you back on track.

It can take a long time to reverse ranking drops, so it’s best to take immediate action.

Once you’ve identified that a Google algorithm update has caused the drop in traffic — which you can do by using the traffic/ranking checking tool, Panguin Tool — you should:

Google algorithm updates can feel scary, but most of the time they roll out with little to no impact. As you’ll see in the next section, over the years Google have improved their communication skills and are more forthcoming with confirming algorithm changes.

Google confirmed their May 2022 core update had begun to roll out. The update finished rolling out on 9th June 2022.

On 23rd March 2022, Google announced via their Search Central blog that they’d be making changes to the way Search ranks product reviews, prioritising detailed reviews with evidence of the products being tested and used.

On 2st December 2021, the Google Search Central Twitter account announced that the product review update has begun to be rolled out for English-language pages. They shared a blog explaining how to improve the product reviews on your site. 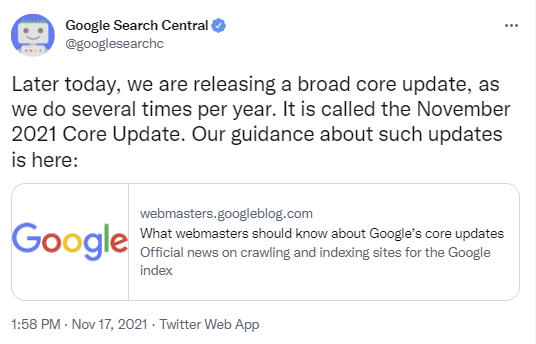 On 3rd November 2021, Google Search Liaison shared a tweet announcing that a spam update had been released, and encouraged sites to follow their best practices for Search.

On July 26th 2021, Google announced that an update to how they process links was being rolled out in an effort to combat link spam. In their announcement blog they stated that,

“Web creators nowadays have many ways to monetize their websites and blogs. Some of these methods lead to the creation of outbound links that, if overdone and not annotated correctly, could violate our quality guidelines.”

This covers both inbound and outbound links.

On July 1st, 2021, Google Search Liaison announced that the July core update was being rolled out. They also shared a blog about how and why they update Search. This core update was completed on 12th July 2021. 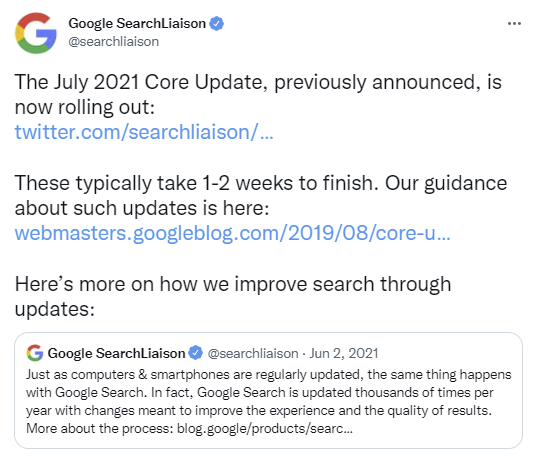 On June 23rd, 2021, Google Search Liaison announced they had released a spam update. They shared a video about spam websites, types of online scams and how Google protects their users from threats. They also linked to a blog explaining how Google fought spam in 2020.

The first part of this update went live on June 23rd, and the second part on June 28th. 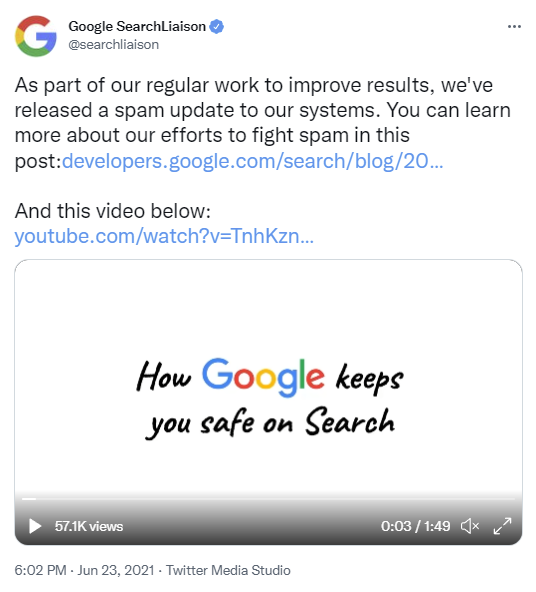 On June 15th, 2021, Google announced that they had begun to roll out their Page Experience update. This update took several page experience signals into consideration, including Core Web Vitals.

In a post on the Google Keyword blog, Google announced that they would be updating search to better protect people from harassment. They wanted to explain how they balance maximising access to information while also protecting people from online harassment.

They expanded on this, stating,

“Once someone has requested a removal from one site with predatory practices, we will automatically apply ranking protections to help prevent content from other similar low quality sites appearing in search results for people’s names. We’re also looking to expand these protections further, as part of our ongoing work in this space.”

On 2nd June 2021, Google Search Liaison announced the June 2021 Core Update, and shared a link to a guide for website owners about core updates.

Announced on 11th February 2021, this update was made to help small sections of long-form articles rank. Google staff described the update as internal, and expanded by saying, “It’s just us getting better at more granularly understanding the content of a page, and being able to score different parts of a page independently.” 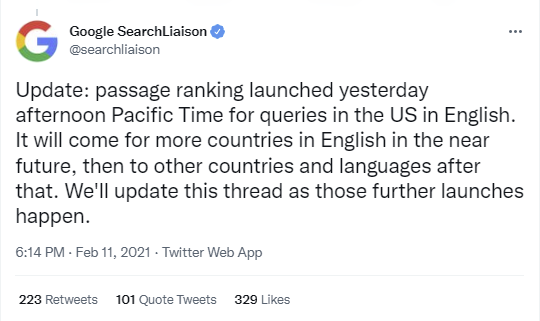 On 3rd December, 2020, Google confirmed the rollout of the December 2020 Core Update, and linked to their webmaster blog post. 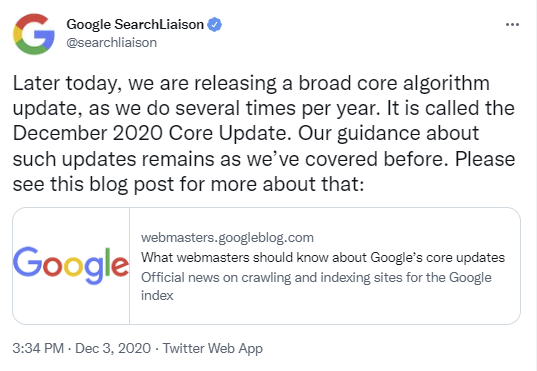 Google Search Liaison announced a broad core algorithm update on May 4th 2020, which launched the same day. They also linked to their webmaster blog post. 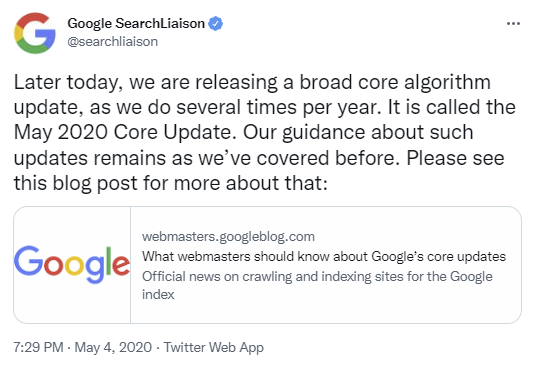 Google announced that pages which had the featured snippet position would not be repeated in page one listings as an ordinary result. 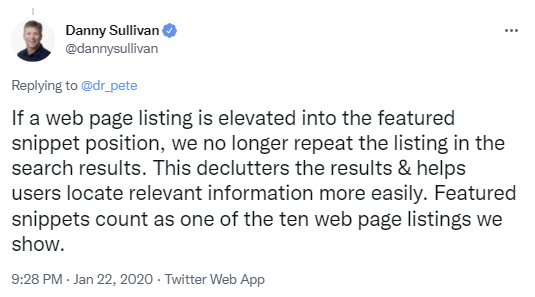 According to a tweet by Danny Sullivan, Google’s public search liaison, the change works as follows,

On January 13th 2020, Google announced that a broad core algorithm update was planned to launch that day. They also linked to their webmaster blog post.

On 9th December 2019, Google announced that the BERT update had been rolled out worldwide. 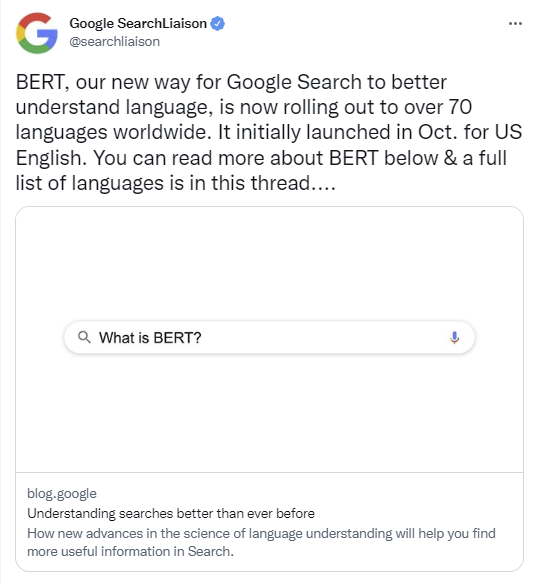 On October 25th, 2019, Google announced the BERT update. This update would impact many site owners, as it would make changes to how Google understands search queries. BERT models, short for Bidirectional Encoder Representations from Transformers, helping Google understand how the words in a search query work together. As Google put it,

“BERT models can therefore consider the full context of a word by looking at the words that come before and after it—particularly useful for understanding the intent behind search queries.”

On 24th September, 2019, Google announced that a broad core algorithm update was planned to launch that day. They also linked to their webmaster blog post.

On 24th September, 2019, Google confirmed that a broad core algorithm update was launched.

On 13th March, 2019, Google confirmed that a broad core algorithm update was launched. 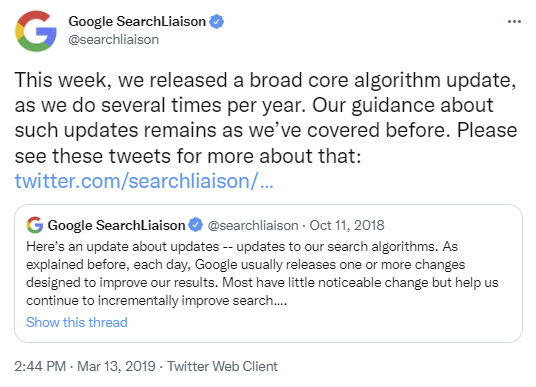 On August 1st, 2018, Google confirmed a broad core algorithm update. This update appeared to impact the health and wellness sector, earning it the nickname of the Medic update. 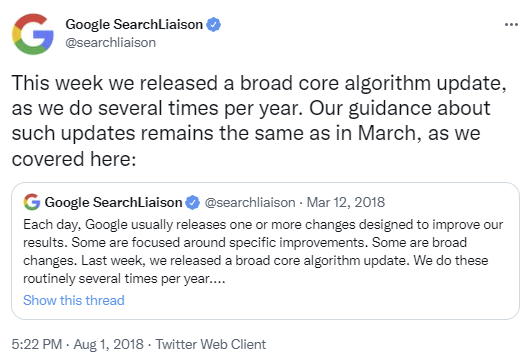 On April 16th, 2018, Google confirmed a broad core algorithm update, and also linked to a tweet about the March broad core update, indicating that it may have a similar impact. 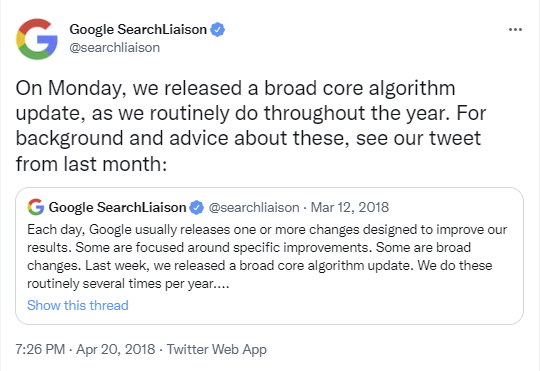 On 12th Match 2018, Google confirmed a broad core algorithm update that had taken place the week before. 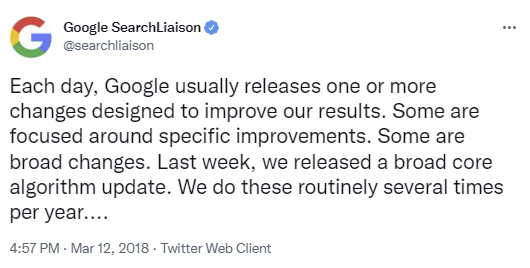 The Google “Fred” update targeted low quality results. These pages were ones with limited content and lots of ads. Many affiliate sites were affected during this time, and sites lost up to 90% of their traffic in some cases.

This update was announced in August 2016, and rolled out in January 2017, with the goal of reducing intrusive interstitials and pop-ups that were damaging the user search experience on mobile devices.

Google’s RankBrain update was rolled out in spring 2015, but wasn’t officially confirmed until October 26th, 2018. This update allowed Google to use machine learning to identify the intent behind a search.

Google began giving a small ranking boost to websites with HTTPS/SSL security set up on their site.

The Pigeon update was launched in July 2014, with the goal of improving local search. They enhanced ranking signals on Google Search and Google Maps.

At a press event in September 2013, Google announced the Hummingbird search update, which was designed to better handle complex search queries. It also helped set the foundations for voice searches, which would be more conversational in nature, such as, “where is my nearest fuel station?” rather than typing “fuel station lincoln” into search.

The Google pirate update aimed to crack down on pirated content ranking highly on their search results.

The Google Penguin update was officially announced in 2012, and was known as the “webspam algorithm update”. The goal of this update was to combat targeted link spam and manipulative link building practices.

The Google Venice update paved the way for location search, using the searchers IP address to return search results local to them.

The Panda update, released in February 2011, is often thought of as the update that changed modern SEO. It aimed to filter out low-quality pages, and reward high quality pages.

Google is making updates regularly, and luckily today’s updates are on a smaller, more managed scale than older updates. Rather than changing the entire algorithm like they did in the past, Google makes smaller changes that may have a small impact on your traffic and ranking, but won’t have business altering effects.

What to Read Next 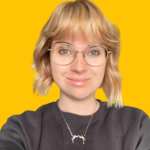 About the Author
Jess Percival
Jess is a Digital Marketer here at Exposure Ninja. She splits her time between social, video and blogging with some live streaming and gaming on...
Read more about Jess Percival