EN Podcast #7: 3 Ways To Maximise ROI Of Your Facebook Adverts

In this episode of the Exposure Ninja Digital Marketing Podcast, Laurence and Tim discuss how to maximise the return on investment (ROI) of Facebook ad campaigns.

After working on and analysing DIY campaigns in a range of markets, we’ve identified some common Facebook ad mistakes that prevent campaigns from being quite as effective as they could be.

This mistake is criminal because it severely reduces the potential of the campaign immediately.

The Facebook pixel is a piece of tracking code which, when installed on your website, tracks every visitor. Facebook can then build an audience from these visitors, which you can then advertise to. This alone is worth the price of entry (free). But it gets better…

Using Facebook’s Custom Audiences feature, you can build a ‘lookalike’ audience from this pixelled traffic. By doing this, you’re instructing Facebook to go and find me some more people just like my current visitors. Facebook then uses its vast data graph to find those Facebook users with the same common traits, behaviours and interactions as those who you are already getting on your website.

It’s our belief that almost every business should be using a Facebook pixel on their site, even if they’re not currently considering running Facebook ads, because this potential future targeting is just too good to ignore.

Imagine that your website converts at 5%. Fully ninety-five percent of your traffic does not convert. If you set a Facebook pixel on your site, you can bring this lost 95% back to the site for a second shot. But only if they’re pixelled.

Mistake 2: Not Setting Up Conversion Tracking

By telling Facebook what a conversion looks like for you (whether it’s a sale, contact form submission or navigation to a particular page), it can then optimise your advert delivery so as to show your ads to the people that are most likely to convert. As it picks up data about what sort of people are converting, Facebook analyses their characteristics, behaviours, likes and interests and begins to build up a picture of the sort of people that they are, and ensures that your ad is being seen by more of these people.

Without conversion tracking, none of this can happen.

Conversion tracking isn’t the only legitimate campaign goal; you might sometimes want to optimise for the most clicks, views to a video or another engagement metric. But for anyone who wants to maximise the ROI of that ad campaign, optimising for conversions is an absolute necessity.

Mistake 3: Not Considering How Facebook Ads Will Help You Achieve Your Goals

Whilst, initially,  this might sound very basic (“surely I just need more traffic so that I can get more customers, right?”), the key mistake here is failing to accept the sort of campaigns that perform best with Facebook.

A business selling a high-ticket item might, for example, take the “more traffic = more sales” approach and drive Facebook ad traffic straight to their product page in the hopes of increasing sales. While there’s a chance this could pay off, it’s unlikely to be the most optimal solution, as only those who are ready to buy right now are going to convert.

A better approach might be to run ads targeted at people earlier in the buying cycle. If there’s a long research phase before the purchase of your product, this approach is ideal as you can run helpful ads to people in the process of working out what to buy. Rather than going in for the kill with a product ad, you might want to send them to a page covering “how to choose the best X”, or a case study of someone in their market who got the desired result from using your product.

Take consultancy, for example. Rather than running an ad which says “hire us now, starting at £5,000/month”, you could run an ad which said “See how these five companies did X” or “Discover the 3 hidden traps which prevent you from Y”. These ads appeal to people at both the early and later stages of the buying process.

Once someone has clicked on an ad expressing interest in your area of specialism, you have their attention. If you reward that attention with good information, you have earned their trust. You can follow this up by running retargeting ads to them pitching the consultancy, or you might want to offer them something in-between. The point is that by giving attention to how Facebook ads perform best, you’ve found a way to build a funnel which grows your business and not just your Facebook ad spend.

If you’re looking for step-by-step instructions to set up and run a Facebook ad campaign, you might want to check out The Ultimate Guide To Running A Ninja Facebook Ad Campaign.

Get a free review of your website and marketing, completely for free, by clicking this link: Get My Review.

Our expert marketing consultants will review your website and record a 15-minute video explaining the marketing strategy they’d use to increase your traffic website’s traffic, leads, and sales.

Step 1: Open your iTunes program. Navigate to the iTunes store and select “Podcasts” Step 2: Search for “Exposure Ninja” in the search bar. Click the cover for the “Digital Marketing Podcast with Tim Cameron-Kitchen” and visit the podcast page. 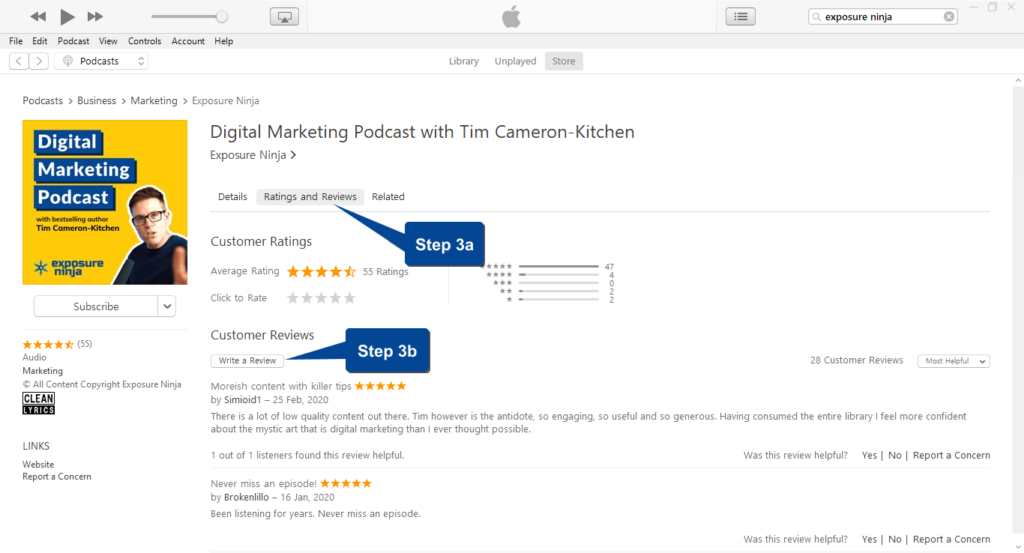 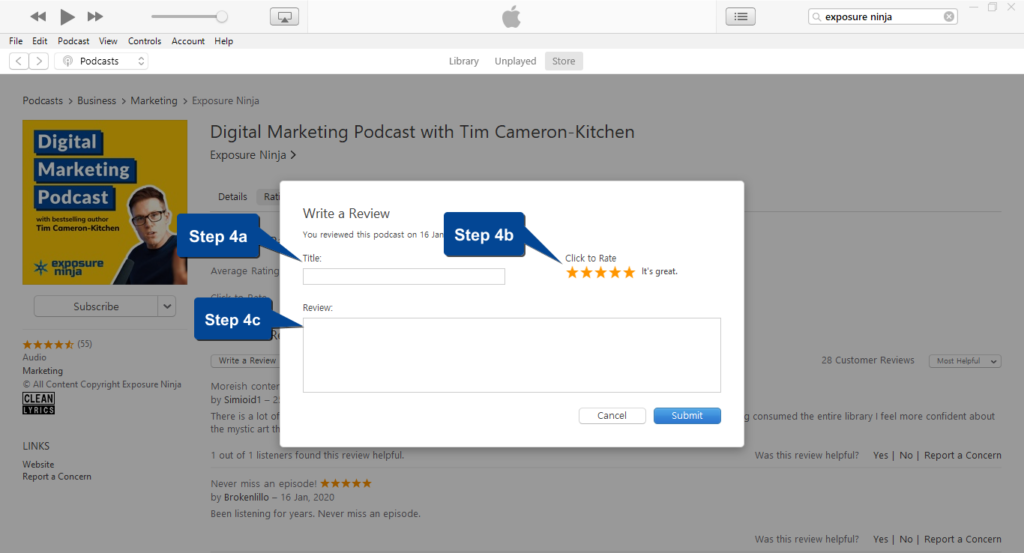