One of the UK’s most successful songwriting and music production training companies approached Exposure Ninja to rebuild their website. We built the site in WordPress (which we also do SEO for), coding some complex bespoke functionality.

After launching the new site, traffic, ranking, and conversions all increased significantly. Read on to see how we did it… 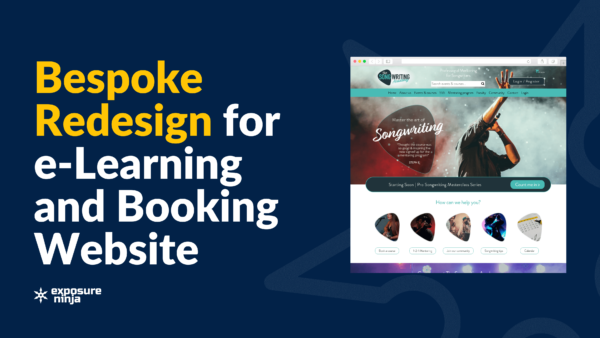 The Songwriting Academy is one of the UK’s best-known and most successful songwriting and music production training companies, but their website wasn’t doing them justice. It didn’t rank particularly well, and because they had to piece different third-party software together to have the functionality they needed, the time had come to get the site redone.

They approached Exposure Ninja having seen our marketing work in action, and knowing that we designed marketing-focussed websites whose primary aim was to increase revenue, not just look pretty.

The Songwriting Academy was looking for a new design that made them stand out from the crowd but still delivered a high customer conversion rate.

They were looking to enhance their current website set up to make it easier for customers to purchase additional courses and online videos.

They wanted to streamline some of the online features they offer to their customers. They were using a range of 3rd party applications which were feeding into the website which all had to be updated manually, wasting time and proving to be a hassle for their customers.

We worked with them, discussing various designs and how they envisioned their new website to look and feel. Once we had a design brief, we tasked Ninja designer Andrei to create the first full design concept. We opted for a fresh and clean design but with a good balance of CRO elements such as forms or calls to action.

We agreed that the website would be built in WordPress, because this would make it easy for the website owners to add more content, update courses, and generally keep the site up-to-date. However, some of the functionality that they required for the new website couldn’t be delivered via a plugin, which meant we had one of our developers custom code the functionality into the website.

During the website build, our SEO team carried out keyword research, and began optimising the site. Our content team wrote the site’s copy, and once the site was ready to launch, we made sure it was submitted correctly and well-optimised.

The following metrics show the direct impact on visibility, traffic and lead generation, and sales that Exposure Ninja’s combined Development, Copywriting and SEO approach to website redesign can have. All data is taken over a 90-day period from April 27th to July 22nd 2017, with traffic and sales data taken from Google Analytics compared against the 90 days previous (January 10th to April 26th 2017).

Here’s what we achieved:

This sort of performance increase in any new website project is excellent, particularly within such a short time of the new website going live.

Without a well designed website, any ranking or traffic increases will result in a dead end in which users are unable to complete the desired user journey we’d prefer them to take. In this example, it was the desired completion of a lead generation form or signing up to the paid service this particular eLearning and music lesson platform offers.

The Design, Copywriting, and SEO teams spent time working alongside the client to build a working environment for the user that would meet their search needs (i.e, answering any search queries they may have regarding this sector), whilst also making it easy for the user to make their interest known to the service provider.

The result of a combined approach from all of the teams ensured that the website copy was well written for the user, but also clear for search engines like Google to parse and generate an idea as to what the website is about and what the purpose is.

The SEO team helped guide the Copywriting team through the research and review of keyword phrase usage within the sector (used by both users and competitors). The Copywriting team then spent significant time working with the client to ensure that all text on the website met their desires and needs. The Design team were then tasked with implementing a method of streamlining this information into an easy-to-use website design which fit the desires of the client. This design was then implemented by our expert Development team.

The SEO team’s final input on the site was to ensure that all items which could be optimised were reviewed accordingly. This work included reviewal and optimisation of onsite elements such as links, headlines, metadata and images.

The consequence of this joint and broad approach to optimisation has been a dramatic increase in both organic traffic (traffic found via search engines) and lead generation/sales.

When we compare the period of April 27th to 22nd July 2017 against the same range of time before it (January 30th to April 26th), we see dramatic increases in important data points across the board.

Traffic from Google alone improved by 15.44%, making up 96.24% of the total search engine traffic generated. This has been led by a 22.27% increase in new users to the website, resulting in a 5.92% increase in total new sessions.

Equally importantly, conversions increased by an unprecedented 1,725% on the site. This has been led by improved tracking for conversions generated, yet still signifies the dramatic impact the optimisation of a website’s design, copy, calls to action and SEO-optimised elements an Exposure Ninja redesign can have.

Typically, a website redesign can result in a momentary reduction in keyword visibility (the percentage of tracked keywords a website may appear for) following a website redesign. This is quite normal and is the result of changes in the copy which Google has crawled, to internal linking, to web page loads times and other factors (including changes to the destination of incoming links from other websites).

On April 19th, the visibility percentage for the 50 core focus keywords we were building the website around was reading at 9.99% from a potential total of 100% (with 100% indicating a first position ranking for all 50 keywords). This visibility score was fairly stagnant at this level and roughly maintained that score throughout the course of the website development (hosted out of site of Google’s crawlers). No SEO or Digital Marketing was actively running at this time.

On the morning of June 8th, prior to the website going live, the visibility score had fluctuated to 7.64% (due to constant algorithm changes which occur daily). The website was then pushed live later in the day.

Following the update, we expected to see a period of reduced ranking, as per our experience to date, due to the multiple changes on the website which Google would need to re-crawl, review and decide on a ranking change accordingly.

Whilst there was a period of seven days in which the website’s keyword visibility was reduced, on the eighth day, visibility began to not only return, but outperform the percentage of visibility prior to the redesign.

Over the following 45 days, keyword visibility exceeded expectations and increased by 6.88%, culminating in a total visibility score of 14.52%, as seen in the image below:

Google is constantly changing the algorithm which results in hundreds of ranking changes within a single day. The result of this is that two users searching for the same keyword phrase may see an entirely different arrangement of links on the search results page to each other. Google compiles all of these variants and calculates the average position between the two for a final Average Position score. This score can be reviewed using Google’s own Search Console tool (which is free to use).

The closer the score is to 1, the more visible that website is.

We also track this score and do so with third-party software. We do so to determine the average positions of websites we work on and review to determine how an entire website is performing in the search engine results pages (SERPs), rather than focusing on just the home page or other array of pages.

The average position of this website on April 19th was 63.85 — an okay score, but not where we knew this website could be.

On the date of the website being pushed live, the score was 62.95. Almost instantly, the website saw immediate improvements, moving to an average position of 59.12 within seven days.

This dramatic improvement in average position not only ensures the website is seen by more users across the client’s target country; it also gives additional opportunities for Google to test how users perform once they click on that result. If the user engages well with the website, then Google will favour the website more in future algorithm changes, which we expect to see given how well the website is performing with lead generation/sales.

As time goes on and an ongoing joint SEO and Content Marketing campaign works on promoting the site, the website should continue to see significant ranking improvements over the months ahead.

The Key Fundamentals for Campaign Success

Sales cannot improve without an increase in qualified traffic.

Through the combined work of a unified and experienced Development, Design, Copywriting, SEO and Project Management team, a website can see dramatic increases across the board for all three key metrics.

If you want a new website that outperforms your old one, we can help. Request a marketing review below, or drop us a message telling us what you have in mind. We’ll be in touch to arrange a free consultation and get your website project priced up and started.