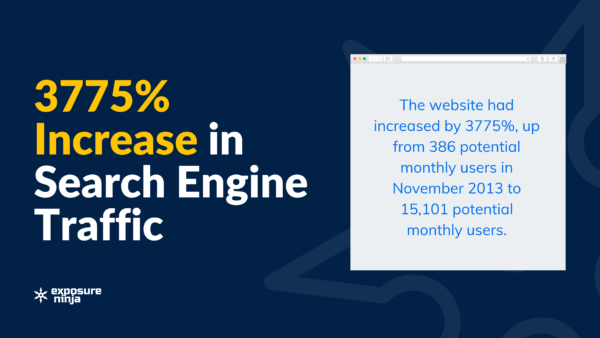 In November 2013, an e-learning platform approached Exposure Ninja with a desire to expand the range of their brand visibility online. Their offline campaign was working well to build brand awareness, but their online traffic, lead generation and sales were not yet meeting their annual targets.

Between November 2013 and July 2017, Exposure Ninja continually worked on a prolonged marketing campaign which focused entirely around onsite SEO guidance for their internal Development team, content creation for their internal blog, and a continued Content Marketing campaign which focused around outreach to associated publishers within or related to the education sector.

The following metrics mark the significant impact the financial investment into an ongoing SEO and Content Marketing campaign can have on improving ranking, traffic, and conversions.

*Due to legal agreements, we’re unable to share exact traffic, lead generation, and sales numbers (and their percentage increases). Some data will be as estimates only.

One method in which we measure search visibility increases is to measure the total quantity of keyword phrases a website appears for within the first 10 or 20 positions of Google’s search engine results pages (SERPs). With 10 links per page, this represents the first two pages.

Earning top three and top ten positions is the focus of all of our campaigns. For this client, there was no exception.

In November 2013, the website was visible for only 64 positions, with only a quarter of those on the first page.

In July 2017, the ranking visibility is almost unrecognisable, having increased by 850%, totalling at 545 keyword phrases.

Of all these high-ranking phrases, 48.07% of them are on the first page, and of those, 73 phrases are within the first three positions (with the highest click-through rate).

The method of achieving this incredible rise in keyword visibility has been through the continued support of the client’s internal Development team – to ensure that the website is healthy and fully functioning – and the build-up of off-site SEO elements such as backlink creation through outreach work and continued article publication on the core importance topics the website has expert knowledge on.

Whilst the client’s own offline campaign was working very well and beginning to gain a national foothold within the education sector, it wasn’t always transforming into the quantity of traffic they desired and required to hit their internal sales goals.

Our goal was to increase this number through the promotion of both the website and the brand as a cornerstone of expertise in the education sector, thereby putting their brand name on the lips of educators and administrators when considering which training resources to invest in for the forthcoming financial year.

The approach we took was to ensure that the website itself was well optimised so that it was healthy and viable as a high-ranking website. To do this, we continually audited the site and forwarded our recommendations to their Development team, who put our list of fixes into action – with the resulting ranking improvements backing up the importance of streamlined and smooth SEO-to-Developer relations.

In partnership with the client, we also provided guidance on internal copy so that it not only utilised their expertise on the subject, but also followed internal and community-verified best practices for SEO. This incorporated keyword research and guidance on how best to use this information, plus recommendations on improved internal linking.

Our own Content Marketing team was tasked with easing the workload of the client by taking on Digital PR and outreach efforts. This was made up through the combination of content creation for publication on educator publishers and relevant sector publishers – imagine a venn diagram in which we contact the publishers which cross over between two sectors, with whom we’ll tailor content which directly suits them.

Work was also spent interacting with others in the sector over social media so that any last minute or future developments in the sector would present an opportunity for comments and expertised-based thought pieces from the client could be shared.

As the campaign progressed, the SEO team would continually monitor, review and alter the keyword strategy for the campaign, so that it met the continually changing landscape and move the priority from keywords to gain movement for new keywords once the first set were ranking on the first page.

On top of this, the SEO team were regularly reviewing and optimising aspects of the website, so that they were in adjusted to changes in the algorithm or optimised further should the first optimisation effort of that particular element not move the needle quite enough.

One example of this would be the metadata for the core services of the website. These were revisited every few months or every other quarter, so that an increased click-through percentage could be gained from the increased ranking position it had earned.

The reason for doing so also has another purpose

Google’s algorithm measures the click-through rate and compares it against the bounce rate for the page linked to. Bounce rate is the percentage of users who leave the website completely or return directly back to Google to try another site.

By improving the click-through rate, Google has more opportunities to review and rate the user journey on the site and how high the bounce rate is. If the number of users returning to Google is high, (with the purpose of trying another site or altering their search phrase) then Google will limit the ranking potential of that site.

Continually returning to this process enabled us to directly affect how Google reviewed and rated the website, therefore enabling us to fashion the best website possible for ranking.

The generation of this incredible increase in traffic is largely the result of two significant results:

* Due to legal agreements, we’re unable to share exact traffic, lead generation, and sales numbers (and their percentage increases). Some data will be as estimates only.

The Key Fundamentals for Campaign Success

The key to success with the campaign can be attributed to a number of factors, all of which are crucial to the success of any digital marketing campaign and the achieving of targets set out both by the client and our own high internal goals.

Through the combination of the above, almost anything is possible for a campaign of this nature and size, with fast approval and resolution amongst the most valuable to a campaign, as this enables all of our teams to complete work which will become the basis of ranking and traffic success.

To put the above into context, we find that the best results from work completed today is typically delivered with strong results 12 months from now. Therefore, immediate action and approval of SEO and Content Marketing work is incredibly important so that we’re not delaying the high-value results Exposure Ninja has been consistently delivering year after year.

Exposure Ninja delivers on its targets. Share your targets with us today.