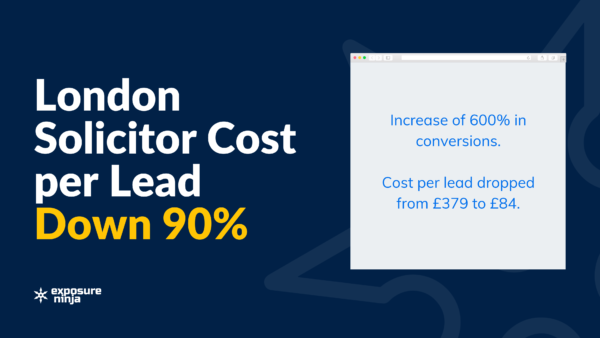 Who We Worked With

This specialist family law solicitors is based in central London, the UK’s most expensive advertising market. Well respected in their industry and ranked in the Legal 500 for providing high-quality family law services, this firm joined the Exposure Ninja family seeking a major improvement in ROI from its existing Google Ads campaign.

What The Objective Was

When this client began working with us, they were self-managing their PPC campaigns. Over eight months, they had spent a considerable amount of money on Paid Search ads for very little return. The main objectives of our campaign were to increase conversions and the return on ad spend.

How We Achieved It

This client has a 6-Action per month SEO and PPC Campaign with us, and we also rebuilt their website to improve conversion rate further.

After a thorough review of the account, we set up a new campaign that better resembled the client’s website structure.

These new ads were the first communication with the firm that potential clients had, so they needed to convey a sense of confidence, trust and reliability. We wrote these ads in the brand’s tone of voice, which was also informed by our work on their SEO campaign.

It was also important for these ads and landing pages to target relevant keywords to achieve a good Quality Score. The higher the Quality Score, the lower the cost per click we’d need to pay, and the better we could compete in the crowded central London market. With many keywords for law firm services in London exceeding £8 per click, we needed to make sure that the campaign was working as hard as possible.

With significant competition and the potential to spend a large amount of budget on keywords that would produce little return, we continued to monitor and fortify the account by improving the positive and negative keyword lists.

After noticing that a large proportion of the website conversions were phone calls, we set up ads targeting phone numbers used directly in the ad. This has proved to be a success, and we’ve been able to get a conversion rate of over 13% by testing and optimising the ad copy.

After just three months of our campaign management, this firm recorded an increase of 600% in conversions. Cost per lead dropped from £379 to £84 during this period, before falling further to just £37 by month 6.

Our ongoing management has yielded further impressive results; since our takeover, we have reduced the campaign spend by an average of 43%, which represents an annual saving of over £7,000 on advertising!

More leads, paying less per lead, and giving less money to Google – what’s not to love?