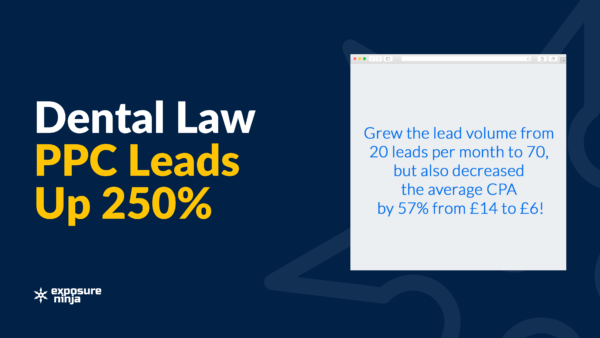 The client came to Exposure Ninja looking to increase leads. The first challenge we identified immediately was that the majority of this client’s potential customers weren’t aware they were eligible to make a claim. Google Ads wouldn’t be much use here, if there wasn’t sufficient search volume to bring them the leads they needed!

Instead, we knew that Facebook Ads would be the way to go to reach these people and encourage them to get in touch about making a potential compensation claim. The client had a campaign that they’d been running, but they wanted to improve results further so they requested a free digital marketing review from us and set us on the case.

While the cost per acquisition (CPA) was fairly healthy at £14 per lead, we wanted to decrease this and grow the number of leads from the campaign’s baseline average of 20 per month. Our main challenge was the audience targeting: their Facebook page only had around 400 followers, we were targeting a specific market, and we had an absolutely tiny budget to work with, meaning we were restricted in terms of how much we could expand our reach.

The first step was to build a conversion-optimised landing page. If a page isn’t optimised for conversion, pointing ads to it can be like trying to fill a leaky bucket! Whatever the campaign’s budget, it’s a good idea to start with conversion optimisation to make sure that we’re not overpaying for leads in the subsequent PPC work.

Next we pointed our lead generation campaign to it.

We ran Facebook ads to drive traffic alongside a Facebook Lead Ads campaign, encouraging prospects to convert directly from the ad. This combined strategy helped us convert both the ‘ready to go’ leads, who were ready to submit their information immediately, and those who first needed to visit the landing page to find more information.

As we gathered data on the campaigns, we began testing new formats and tweaking the ad copy to keep the creative fresh, so we could use it to reach new audiences. For each of the campaigns we had active, we tested targeting new audiences, including a lookalike audience of existing leads.

We had four campaigns active:

These campaigns led to further improvements in the CPA and volume of leads, averaging 66 leads per month and a CPA of £8.86. We took advantage of the option to duplicate the engagement of the existing ads, so each of the new campaigns already had healthy numbers of comments, likes and shares, increasing social proof and leading to further engagement.

We later added new copy variations for a specific type of claim. The best month so far has earned 73 leads at a CPA of just £6.20.

This campaign has been managed on a two-Actions per month Facebook Ads package.

The campaigns performed so well and delivered leads so consistently that the client had to temporarily reduce their already low ad spend to keep up with demand!