This lighting eCommerce store came to Exposure Ninja having had been running their own Google Ads. The ads were unprofitable for them, but they wanted more sales. They needed Ninjas. 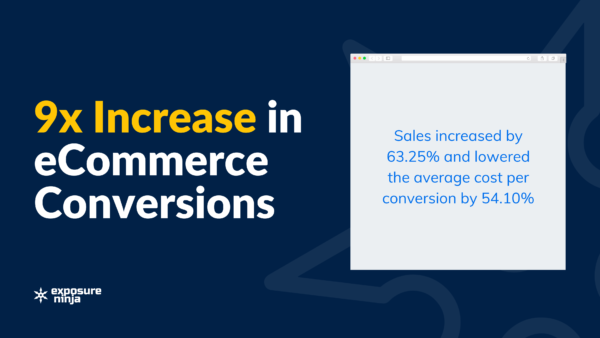 This eCommerce store specialises in bespoke indoor and outdoor wall lights. The owner had previously been running their own PPC and shopping campaign. However, this hadn’t seen much success in recent months, with an average CPA of £76.04.

To increase the number of sales and lower the average CPA on the PPC campaigns.

The Google Ads campaign had previously been set up to target lots of different products, which appeared to be costing the business a lot of money for very little return. We decided it would be more effective to narrow this down to the top level keywords and focus on the broader terms that the shopping campaign may not pick up on. We re-wrote the ads for the Adwords campaign in the new extended format and made sure that the ads had all relevant ad extensions implemented.

The Google Shopping campaign was previously set up to promote all products on the website. However, the campaign budget was fairly limited and when running a campaign on a limited budget, running shopping ads for a large number of products is not an advisable strategy. We therefore decided to strip out the products into different product groups focusing on the best sellers — or products with a high ROI. We adjusted the bids to ensure that the best selling product group ads would be more visible in the SERP space.

From the data in the old campaigns, we were able to set up an ad schedule to ensure that the campaigns were more visible during the most successful sale times during the day and also so that we could reserve the daily budget as much as possible during the lower converting hours.

In month one, we increased the number of sales by 63.25% and lowered the average cost per conversion by 54.10%. This was the highest level of continual sales the company had seen from the paid search campaigns and it also meant that they achieved a positive ROI after just one month of our services.

As the campaign continued, we have been able to bring the CPA down further and further, eventually getting it down to £14.41 – down from £76.04.