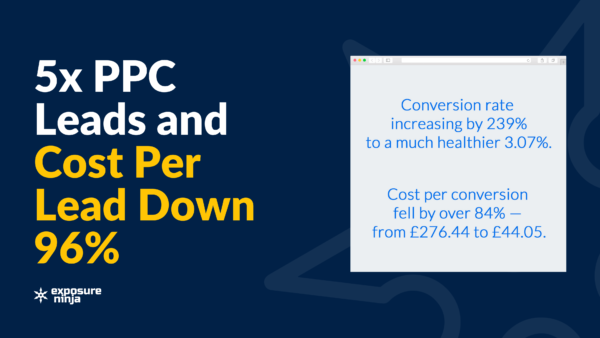 This independent estate agents serving West London came to us looking for professional Google Ads management after previously managing their campaigns in-house and with a very low budget. At the time of our takeover, the client’s cost per lead was too high for the campaign to be profitable, at £276.44. Their conversion rate was just 0.92%.

Our goal was to increase enquiries from vendors looking to sell their properties as well as increase leads from landlords looking to rent their property. This estate agent operates in a highly competitive location, so it would be vital from an early stage to create a targeted campaign that highlighted the USPs of this particular business.

Our initial priority was a bit of a post mortem on their Google Ads account to identify why things had been working so poorly for them. We then conducted detailed keyword research to find only the most relevant traffic to the site that was likely to convert. We also fixed up the ads, making them more attractive to potential clickers and adding compelling calls to action.

This client is on a really small SEO and PPC campaign of just 4 Actions per month, showing that we can create and maintain excellent results even on campaigns with fewer Actions. On a larger campaign, the main difference would have been the speed of results.

We have worked with this client for over two years now, continuously optimising the campaign month on month to further improve results. At the time of writing, over the last quarter, we recorded 145 leads (an average of 48 per month), marking a 7,150% increase since our takeover. We’ve also increased the conversion rate further to 6.86% and brought the quarterly cost per conversion down to £15.59, with an all-time low set in September 2019 of just over £11.

One of the misconceptions about Google Ads is that once a campaign is optimised, there’s nothing more that can be done. The continual performance improvements in this campaign show that, actually, even a highly profitable campaign can be squeezed and improved further.

We’re still achieving improvements to CPA and lead volume 2 years after first taking over the account, because we work as hard today as we did on day 1. No rest for the PPC Ninjas!